Grace and Eleanor completed their medical electives at the Jinja Regional Referral Hospital and Nalufenva Childrens Hospital, Uganda. Here is part one of their eye-opening blog.

This elective with Act4Africa has been the best experience of our lives. Uganda is a fantastic country, it was fascinating being in the hospitals and really was wonderful being in such a different place for seven weeks. It was very different to home, yet so enjoyable. We could not have asked for more. There are so many things to do, we weren’t bored for a moment over the 7 weeks. 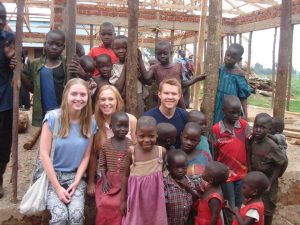 The predominant conditions differed from England. The majority of patients had either malaria, TB, pneumonia or a traumatic injury. This was often in conjunction with HIV. We learned about HIV testing and counselling in the community villages with Act4Africa, and helping those who have just been given the diagnosis. It is a difficult time for patients, as it is seen as not only a death sentence but also something to be ashamed of. We tested over 250 people and only had three new positives. We also learnt a lot about management of simple and complicated malaria, meningitis and pneumonia. In clinical settings, our ‘improvisation’ skills were enhanced as the lack of equipment meant it was key to think outside the box, to ensure patients got what they needed.

Lots of patients presented late in their disease pathway due to a mistrust of authority and belief in witchcraft. This means that lots of people die when they could have received treatment earlier. Malaria in children is a typical example of this. On a few occasions, we saw children with complicated malaria who had been ‘treated’ at home for a week before coming to seek help. The children then progressed to having meningitis or encephalitis or pneumonia, meaning the chances of recovery are smaller and resources to help them are fewer. 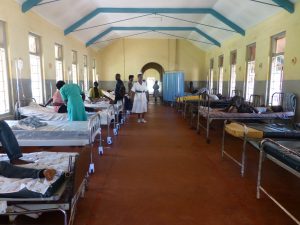 The biggest difference to the UK was how under-resourced the hospitals were. The paediatric emergency department had one oxygen canister with two lines that children shared – that was if we were able to find a mask. The main hospital simply did not have one. Drugs were limited and patients would often have to go to an expensive private clinic to find what they had been prescribed. Beds and wheelchairs were falling apart and they were running out of needles, doctors used old gloves as tourniquets and had no blood in stock. It really was shocking as it forced people to have to go to private hospitals to buy it themselves. Mothers who could not afford to buy their children blood for a transfusion were forced to watch their child die.

Being English and student doctor’s meant that we were given great respect outside of the hospital. It became clear quickly that this position meant we were more easily able to educate the public about HIV and simply our presence meant that villagers would come to be tested. We visited the orphanage, the school houses and the social workers ‘cottages’ for children who had been removed from their families. We also spent time with the charity GI-ASCO which takes in street children, gives them a home and sends them to school. We went and helped out with homework and attended their fundraiser. This was another aspect of Uganda that impacted us, the amount of children who lived on the streets or in orphanages because their parents could not cope with having so many children. Children were persecuted by the police for their vulnerability and homelessness.

One of the most important parts of the elective was immersing ourselves in a completely new culture; Uganda was so different to England. Everything runs at ‘Africa time’ and life seems relaxed. Spending time with new people, chatting and joining in with local activities was an invaluable experience and something we’ll never forget. 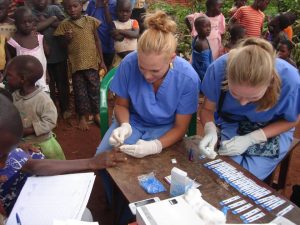 Religion plays an important part of life, 80% are Christian. Preachers were telling the community that they would be cured of HIV if they prayed enough. Patients put their faith in God, and that often meant medication compliance was low and they believed God would cure them of diseases. We met a man who had initially been told he had hepatitis, treated, then it was discovered he had terminal hepatocellular carcinoma. His pastor told him he would be cured, so he refused any medications including pain relief. He died two weeks later.

Many people in Uganda are socially deprived, so levels of hygiene and education are low. This alone causes health problems. One example of disease due to lack of hygiene is ‘jiggers’ in peoples feet (a flea, and untreated can deform the foot or leg). Another example would be typhoid (due to drinking dirty water) or foot wounds from being barefoot. A big problem in paediatrics is malnutrition, due to lack of education – not understanding about contraception so mothers get pregnant again and cannot afford to feed the previous child or children. Malnutrition is also due to the culture of breast feeding children for too long (two and a half years), meaning they do not get the nutrients they need as they grow. At the paediatric hospital in Uganda, there was a whole ward dedicated to malnutrition and educating parents about nutrition for their children. There were 4 wards in total, so this gives an idea of the scale of the problem. 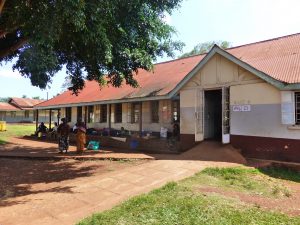 Even in the supposed free government hospitals, patients have to pay for everything they use while in hospital; from the blood tests and X-ray films, to the exercise book their notes are written in. If they do not have money, they do not get treated. Nurses do not deliver any care other than medical to the patients. Patients have to rely on their attendants, usually family members, to provide all food and bedding. We saw a very sick patient on a ward round who did not have an attendant; he was lying on an uncovered metal bed and had not eaten for three days.

Keep an eye on The Blog for more insightful blogs from Grace and Eleanor.

Attendant families prepare food for patients outside the wards.