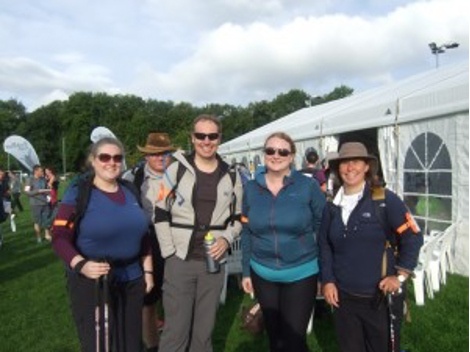 Posted at 13:00h in News by Ragad Mohamed 0 Comments
0 Likes

Taking on TrekFest is no mean feat but the challenge is simple – complete your chosen course!  For Maddie Rock and her team of GeoTrekkers this meant completing the 27 miles of footpaths and bridleways in the beautiful and inspiring Peak District in just 12 hours!  TrekFest promises to push participants to their limits and prove that anything is possible!  Maddie’s experience was certainly testament to that!

Well we did it! It was certainly an eventful day; when we set off at 9:15 the sun was shining, the forecast was good, sunset was a long way away and we were feeling relatively optimistic for the 12hour finish time.  Despite the number of people walking around us we had a comfortable first couple of miles before heading up to Hollins Cross and the Mam Tor ridge. There was time for a quick drink stop before enjoying the downhill run into Edale. The first check point was reached in plenty of time and we turned west along the Pennine Way and up Jacob’s Ladder onto Kinder Scout. There wasn’t much time for admiring the view – but it was fabulous – before we turned along the edge, walking past Kinder Downfall, and along to the top of William Clough where we began the descent towards Hayfield when we encountered an unexpected challenge. 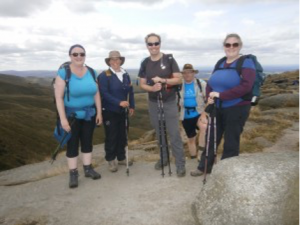 Nearing the bottom of the valley a fellow TrekFester, Paul, who was walking with his team just in front of us suddenly slipped and fell into the stream next to the footpath, banging his head on the way down.  My husband, James, scrambled to help pull him out and get him back onto dry land. As the rest of our team (Avril, Amy and Peter) caught up, Paul had gone into shock and it was all hands on deck to get him dry and warm along with his team mates. With no phone signal, Avril and Amy ran down the footpath to try and get help and Peter sprang into action to calm Paul’s team mates and keep him awake and talking whilst Mountain Rescue were called. It seemed a long time before we heard a helicopter and after they had located us, and the TrekFest staff had arrived at the site, it wasn’t long before the Mountain Rescue team made it to us and we left Paul in their capable hands.

We estimated we had stopped for about an hour and a half and we were struggling to warm ourselves up again, Peter especially after he had been crouched down for so long. Picking up Avril and Amy on the way past Kinder Reservoir we headed in and out of Hayfield at a relatively quick pace to make it to the next check point where hot food and a cup of tea were promised! Unfortunately, given our lateness, we had little time and had to move swiftly on so that we would make the next, and final, check point in time. Soon after leaving we had to stop again as a number of people in front of us had headed off uphill and away from the correct route and after a lot of shouting and gesticulating got them back on the right path. The next 7 miles quickly saw us spread out and it was pretty much every man for themselves as fatigue kicked in.

The last check point was reached and sun glasses were swapped for head torches as we headed off into the dark for the last 4 miles of the walk. Initially a grassed track meant the going was easy but that soon changed to a boulder strewn path and we were struggling. After a short drop down into a quarry (and after some shouting to other torches we could see in the quarry bottom to find the way down!) we were out and onto a road for the last stretch to the finish line – what a relief! We walked over the line about 10:30pm – to hear that Paul had been airlifted safely and was doing well. We headed straight for the tent and warm food, and the Fanta that Amy’s brother brought for us never tasted so good. 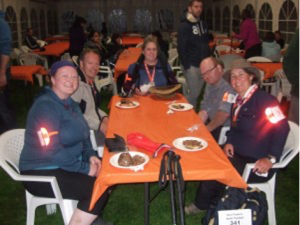 We are thrilled we have raised so much for Kathy’s Fund, and you can still sponsor us via http://uk.virginmoneygiving.com/team/geotrekkers

Congratulations to Maddie and team for having the stamina to stick with it and many thanks for raising over £2k funds for Kathy’s Fund so far .