Kasese district, Western Uganda has been repeatedly ravaged by floods over the last 7 months, leaving over 100,000 people homeless. Heavy rains have caused most of the major rivers in the district to burst their banks. Notably, we had river Nyamwamba, Mubuku, and river Nyamugasani which flooded, destroying lives and many properties, including a government hospital, several schools, and people’s homes. The floods unfortunately swept away gardens of crops that left many people with no shelter, food or clean water.

As a result of the gross effects of these catastrophes from May to November, the government aid was not sufficient for all of the victims and many found themselves living in camps where they had to depend entirely on relief food and other basic necessities which were mainly provided by charity organizations and well-wishers.

The camp which we visited is in the Nyamwamba division of Kasese municipality. It is divided into 3 sections. Approximately 50 families are living in each section of the camp with a total population of around 250 people living in makeshift houses made of tarpaulin, sharing 3 toilets with only 1 tap that also provides water to the surrounding community.

Prior to the relief distribution, the local council chairperson told us about his frustrations and shared great concern for the pregnant mothers giving birth in the camp without good care. Most rely on traditional birth attendants and those who do manage to reach the health facilities have no money to get proper postnatal care. He said that since the existence of the camp, 18 mothers have given birth with many more being pregnant and expecting any time soon. The issue of increased cases of teenage pregnancy in the camp results from idleness by the youth, mostly since no economic or social activity in the camp engages them and they lack knowledge about sexual reproductive health. He said that these increased cases of pregnancies by young girls will mean most of them miss out on studying even after schools fully reopen next year.

The chairperson also talked about the challenges of attending to people suffering with mental illness in the camp who need special consideration from the government or any other organization to help them get the correct treatment. He also highlighted the need to sensitize and counsel families of those suffering from poor mental health, so that they can live without being isolated by others.

It is against this background that Act4Africa received an emergency grant from Global Giving to come to the rescue of people living in camps.  We were able to give food and sanitation items to help the people of Kasese, especially those living in camps to minimize the possible outbreak of diseases in these crowded camps. While giving out aid, Act4Africa mostly identified families with many children, pregnant mothers, people with disabilities, and the elderly as the most vulnerable people that required urgent assistance.

We gave out a range of foods like, maize and cassava flour, cooking oil and rice to help people improve their diet. 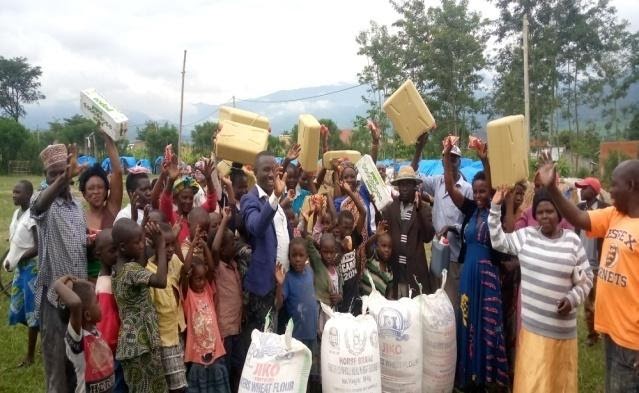 Relief items such as washing bar soap and liquid soap, hand washing tap and dustbins will help fight diseases like cholera and coronavirus by washing hands at the entry point of the camp and having a good garbage collection point.

This aid by Act4Africa was greatly appreciated by the camp residents who said that it will improve the diet of their families and improve the general sanitation of the camp.

“Thank you Act4Africa for this food relief that has been timely because we were having no food” said one of the mothers in the camp.

Looking at the effects of lockdown in the country resulting from Covid19, economically people are unable to work and earn money that will enable them decent lifestyles like before or construct houses that were washed by floods. They called on Act4Africa and all its partners and well-wishers to consider them and supply more food to them because government aid is always slow. The food aid provided by Act4Africa was a great relief to the people of Kanyageya living in camps and they greatly appreciated the works of the charity and support of Global Giving. It’s from here that people called on other organizations to come and do the same because the floods completely took all their properties. 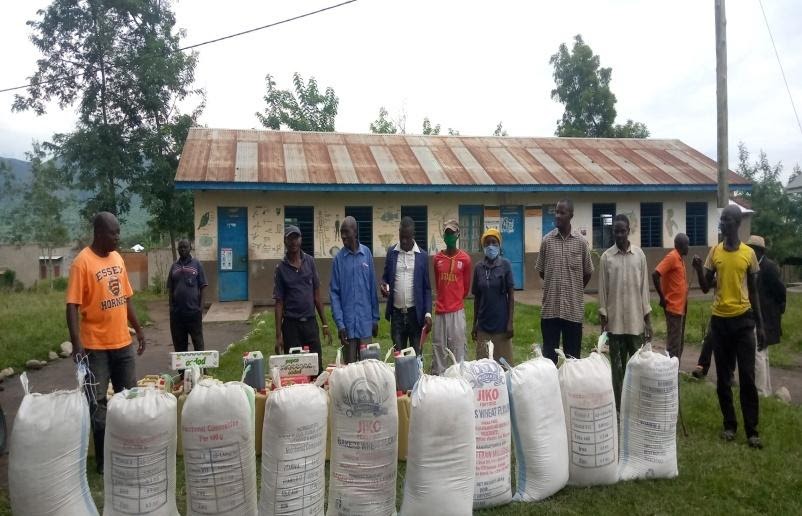